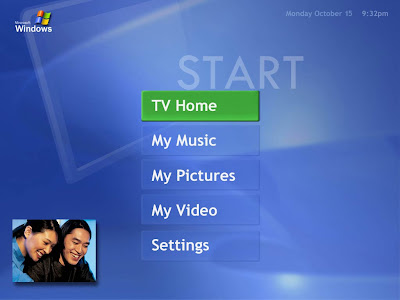 ). The main reason I went for a Panasonic Plasma was because it was supposed to be better than LCD's at displaying Standard Definition (SD) sources. I only have SD sources like Sky and a DVD player so I wanted to be sure that it would look as good or better for SD. The day I got it, Superman Returns was on BBC One. I was amazed at the quality of the film, it was crystal clear to my eyes. Over the weeks I have most got used to the picture quality however once in a while some thing comes on the screen that makes you say WOW.

Any way back to the main focus of the article. So I had a T.V with good connectivity (3 HDMI, VGA) now I wanted to connect a media centre to it so that I could browse my media collection from my living room.

My options were the following:

I briefly looked at the first two options of an 'off the shelf system' or a 'self built system'. Unfortunately I couldn't justify the cost of the system as it wouldn't be used that often and it would be faster than my main pc!

Finally when reading LifeHacker I came across an article about uses for an old laptop. Then I had a eureka moment of using an old laptop that had a bust screen as my media centre. The laptop top was fully functional apart from the bust screen and it was a fairly capable machine. (AMD Processor , 512mb, 80Gb Hard drive)

So what operating system should I go for? The options were Vista, Windows XP or Linux (Probably Ubuntu 8.10).

As usual I was abit optomistic and tried Vista on the laptop. The reason was that it has an integrated Media Centre application (Media Center). It installed nicely but 512 Mb was just not enough to be usable. Vistas Media Center is a very nice system but it wasn't responsive enough to be useable. I even tried a 2 Gig ReadyBoost usb drive in order to speed it up but it didn't make as much difference as I hoped.

Next I tried Ubuntu 8.10. It also installed fine and was responsive in operation however the screen display on the T.V. was very dark and the resolution wasn't being picked up correctly. Unfortunatly I had to leave the Ubuntu experiement due to time contrainst but I would like to figure this out for future reference. (If anybody has any ideas then please let me know in the comments).

I finally settled for Win XP. It worked fine on the laptop and was very responsive. It didn't pick up the VGA graphics, on board sound and the ATI Remote Wonder but a quick visit to the Acer site got me all the drivers I needed.

I had an ATI Remote Wonder from a few years ago which I wanted to get working. I got Win XP to find the drivers for it online and found the software for it on ATI (AMD). The software install finished with an error which wasn't good. After abit of googling I found that this was a common error and I needed to add two dlls from here and here to

In the next post I will discuss the various types of media centre software that it available.