Emails delayed by one day in Outlook

We had an interesting problem at work that I think would be useful to document.

A user sent in a helpdesk ticket about receiving emails a day later than everybody else. No one else had reported this issue so we decided to ask our email server provider about the issue. They said there were no issues on their side and all mail was going through as normal.

We sent a few test messages to the user and asked if she received them in time. She replyed the next day and said they were still coming through a day later. 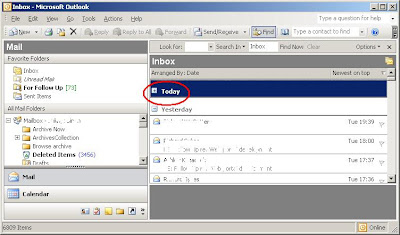 Can you see the deliberate mistake..?

Somehow the user had managed to minimise the 'today' group for emails so emails would only show up when they show up in the yesterday group i.e. if they were sent yesterday.

Fair to say the user was quite embarrased when we pointed out what had happened!
Posted by Sony at 08:19

ooops. Did the same thing yesterday. A search found your post today and fixed problem before I ran around looking like an idiot. Thanks.

french translation is kind of hard at first but if you get used to it, then it is easy’ link

I seem to recall that by Star Trek: Next Generation, the Romulans had become a group of worthy adversaries to the denizens of the Federation. hotmail email login