At work we had a very old machine that we used for Delphi 6 development. The time had come to upgrade it. We decided that the most flexible way of upgrading it was to virtualise it.

Below are the steps we followed to virtualise the Delphi 6 machine.

Everything was hunky dory up until step 4.

I clicked on the Delphi 6 icon to start it up and I got an activation request with three options on it.
I chose activate later and Delphi closed down. So I tried activate over the web. This option timed out. Finally I chose Activate over phone / email. This looked more promising. I had to go to a website and enter my activation details. I entered all required information and and clicked next. The activation wizard said Delphi had been activated and registered but then behind it there was another box stating that the registration / activation information was missing or corrupt.

I rang Embarcadero and they said they only way to solve this was to run D6RegClean.exe from the bin directory of the Delphi6 install. This would have removed all my third party tools and and all my customisation. So I decided to keep this option as a last resort!

From my conversation with Embarcadero I relialised that a registry entry was to blame so I delved into the murky world of Windows registry.

I found that there were three keys related to licensing 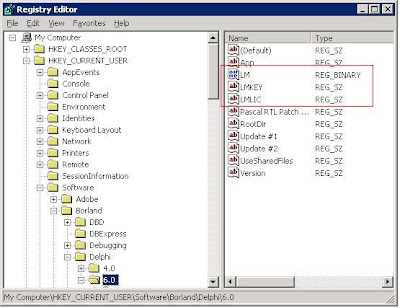 LMKEY and LMLIC had correct information about my keys. So the only other one to investigate was LM. This was a binary number and looked like is was automatically generated.

(Please note: Messing around with the registry can break your system only do it if you know what your doing)
So I took a backup of the registery and removed LM key. I tried registering again and it worked!

Hope this helps someone.

This saved my day.
I need Delphi 6 on Windows 10, and your solution worked perfectly.

I'm glad this post is still helping people. Thanks for the comments