Over the past month we have had a lot of problems setting up some some software that included integrated Wake on LAN. The software wouldn't wake any of our computers up even though the computers BOIS settings were correctly set to enable Wake on LAN.

During this time I was inspired to create my own Wake on LAN (WOL) programme so that I could prove that our network wasn't to blame for the computers not waking up. 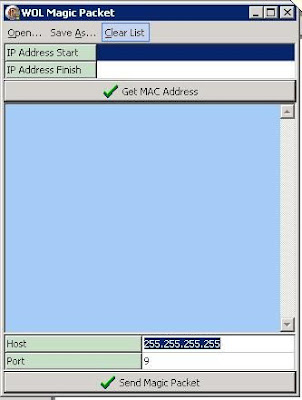 Please let me know what you think about this.
Posted by Sony at 22:40

Hence, it becomes essential for enterprises to focus on the quality and user experience of their applications throughout the software development lifecycle. xero bookkeeping services singapore

It was a very good post indeed. I thoroughly enjoyed reading it in my lunch time. Will surely come and visit this blog more often. Thanks for sharing. download free software for pc

Love to read it,Waiting For More new Update and I Already Read your Recent Post its Great Thanks. .Net FrameWork Offline Installer

It's interesting that many of the bloggers to helped clarify a few things for me as well as giving.Most of ideas can be nice content.The people to give them a good shake to get your point and across the command.
PROJECT MANAGEMENT